I have already argued that you shouldn’t put all your includes in your .h files. Here is one more reason, compilation time.

Have a look at this example, where the arrows mean “includes”

file5.h apparently need access to something which is defined in file4.h, which again needs access to three other headers. Because of this, all other files that include file5.h also includes file[1-4].h.

As we can see, this has a dramatic effect on compilation time. file6.cpp and file7.cpp just needed something from file5.h, but got an entire tree of headers which added 1.2 seconds to their compilation times. This might not sound much, but those numbers add up when the number of files is large. Also, if you’re trying to do TDD, every second counts. And in some cases, compilation times of individual headers can be a lot worse than in this example.

What if file5 didn’t really need to have #include "file4.h" in the header, but could move it to the source file instead? Then we would have this diagram: 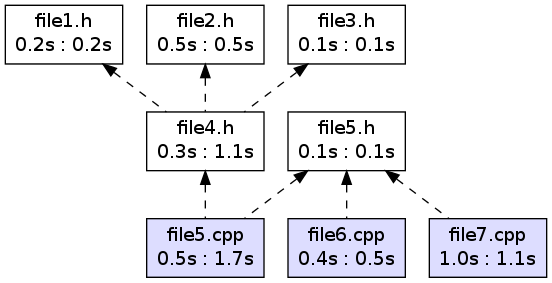 The compilation time of file[6-7].cpp is significantly reduced.

Now let’s look at what happens if a header file is modified. Let’s say you need to make a minor update in file1.h. When that file is changed, all the files that include it need to be recompiled as well:

But if we were able to #include "file4.h" in file5.cpp instead of file5.h, only one cpp file would need to recompile: 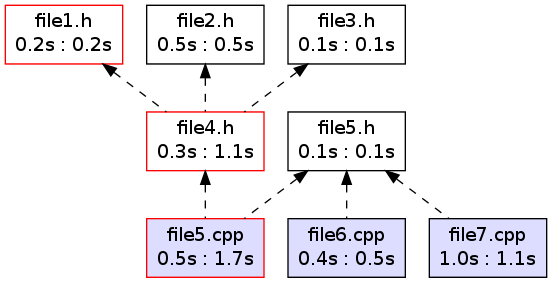 Recompilation time: 1.7 seconds vs. 4.5 seconds. And in a large project, this would be a lot worse. So please try to move your #includes down into the cpp files whenever you can!

The Graphviz code and makefile for this blog post is available on GitHub.

9 thoughts on “Another Reason to Avoid #includes in Headers”